Being on the Same Team

My husband and I have never had an argument. That’s right. Not once in nearly two years of marriage or the nine months of dating before that. (Update: More than 7 years of marriage now, and still no arguments.) A lot of people will probably think that’s because we never discuss anything serious or because we avoid talking about problems, but that is not the case. We talk about everything and we do sometimes disagree. We just don’t argue about it.


You see, arguing involves two people who not only disagree, but insist on their way. It’s a me against you attitude. And it’s usually rather emotional. Doug and I talked about this before we even got married and decided that we would do our best not to handle disagreements by arguing about them. Instead, we make it point to remember that we are on the same team. The goal is not to get our way or prove that we are right, but to find the best solution together. So we discuss issues rationally and work toward finding the best solution – whether that’s his idea, my idea, or some other solution. Handling problems from the perspective that we are teammates really helps keep us close and minimizes friction between us.

Of course, it helps that we usually see eye to eye on things. And it also helps that we both are the logical, analytical type. Neither of us is likely to fly off the handle or break down in tears. But I’m convinced that having a team mentality can help anyone have a better, less contentious marriage.

The thing to consider, though, is that you can’t remember to think of your spouse as your teammate when problems arise if you don’t during the rest of the time. In other words, it has to be a permanent pattern in your thinking, not just a good intention during times of disagreement.


Part of the reason that Doug and I started thinking and talking about being on the same team was an observation Doug had made years before we ever met. There was a man he knew at work who had been happily married for many years. While the other guys at work would often make jokes or complain about their wives, this man never did. He never called her his “old lady” or made fun of her in public. Instead, he always spoke of her as if she was the best thing that ever happened to him. It was obvious that he loved and respected her. Doug decided then that he wanted a marriage like that.

When we were talking about how things would be in our marriage, Doug brought up this story. It hit me then that it’s easy to get sucked into the “complain about my spouse” habit - especially when everyone around you is doing it. I know when men or women get together and talk and one starts complaining, it can easily degenerate into gossip and complaints. It’s like we want to outdo each other with stories of how bad we have it. It’s almost like talking about someone behind their back is somehow okay if it’s your spouse. But if anyone should be able to count on you to have their back, to stand with them against the world, it should be your spouse.

The other problem with this complaining attitude is that tearing down your spouse to other people also causes you to focus on the negative aspects of your spouse. Everyone has less than perfect attributes, but focusing on them only leads to nitpicking, dissatisfaction, and friction in the marriage. Complaining is corrosive to a marriage. It is far better, for our own sake and that of our marriage, to focus on the positive aspects. And when you start purposely focusing on the ways in which your spouse is wonderful, you get more and more grateful for your relationship.


So, Doug and I make it a point to refrain from complaining about each other, even to other people, and even in jest. My husband is my best friend and I love him. I want him to know that I am on his side, no matter what. We are going to encourage each other and stand by each other when we’re together and also when we’re apart. When others complain about their spouses, I try to turn it around by bragging about my husband. I focus on the positive aspects, not the negative ones. It’s no wonder then, that we are quite happily married. It doesn’t happen by accident. It takes a conscious decision to be, at all times, on the same team. 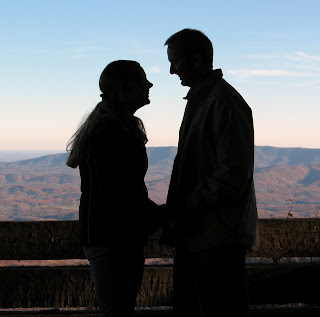 Linked up with WLWW, To Love, Honor and Vacuum, Yes They're All Ours, Warrior Wives, and The Alabaster Jar.﻿
Posted by Lindsay Harold at 12:15 PM