God Has No Feminine Side

I hear the statement that God is both masculine and feminine or that God has both male and female traits now and then, and I think it is worth clarifying the issue because it is easy to be misled into an erroneous view of God. It is not uncommon to hear people claim that God could just as easily be referred to as Goddess or to hear them speaking of Him as Mother God or something of that nature. Even those who don't go that far might be a little confused about God's gender, if you will. So perhaps this will be helpful.

I should think it obvious that God the Father does not have a body and thus has no sex. He is not male or female and has no attributes of male or female bodies. So we must distinguish in this case between biological sex and personal attributes such as masculinity and femininity which could apply even to a spirit being.

What people often mean when they claim that God has both male and female traits is that God exhibits all the good traits which we attribute to both men and women, including some that we might associate more with one gender or the other (such as caring, nurturing, compassion for females or strength and courage for males). This part is true. God does exhibit all good traits.

However, such character traits are not necessarily either masculine or feminine. We often associate certain traits more strongly with masculine or feminine roles, but the traits themselves, in being good and noble, are not solely the province of either gender. A man can be caring or compassionate and do so without being feminine. A woman can be courageous or strong without being masculine. So the roles of masculinity and femininity are not merely a collection of traits.

I would claim that the underlying basis for masculinity and femininity are in their contrast to one another and their emphasis more so than individual traits, and especially their contrast with regard to authority and leadership. The masculine role is one of leadership, authority, protection, and provision with respect to the feminine and the feminine role is one of receptiveness, submission, vulnerability, and willingness to be led with regard to the masculine.

Under this definition, God is only masculine because He holds only the role of authority, provision, protection, and leadership with regard to everything else that exists - His creation. God does not hold the feminine role. Ever. He submits to no one. He is not led by anyone. And thus while we can acknowledge that God can and does exhibit compassion, nurturing, and care for those in need, these do not make God feminine any more than they would make any man feminine. They are noble and good traits and have no inherent gender, even if the female sex is more associated with them, and perhaps exhibits them more often.

God's role with respect to His creation is the role of the masculine, and thus we should only refer to God with masculine pronouns. That is also, not coincidentally, the way that God has revealed Himself to us. It is a serious error to claim God is feminine, and we must be careful to avoid this error.

The common feminist advice given to women to live in the moment, travel the world, go drinking, hook up, and have fun in your 20's and even 30's and then settle down and be a mom when you've had your fill is absolutely terrible advice for many reasons.

1) A woman's fertility is not guaranteed. Waiting until the 30's or 40's to have children all too often means not being able to have them at all. Not naturally, anyway, and often reproductive technologies can't even help. Fertility, unlike travel or luxuries, won't wait. Use it while you have it.

2) Having children doesn't prevent women from having fun, as so many assume. Yes, children tie you down to some degree, but they're not little ball and chains. Your life isn't over when you have kids. In fact, having children helps us realize what really matters about life and have a far richer and more fulfilling experience than any party lifestyle will ever provide.

3) Being irresponsible, drinking, partying, and hooking up are terrible choices regardless of what age you are or whether or not you have kids. They're bad moral choices and also harmful in many other ways.

4) Being a party animal doesn't prepare a woman for being a wife and mother. Quite the opposite. It teaches her to live for her instant gratification and not consider others or the future. It teaches her to resent children as little burdens that stop her from doing what she wants to do. It teaches her to care only about herself. In short, it turns her inward rather than outward and fuels her natural selfishness, which is exactly the opposite of what is needed in a good mother.

5) Partying, drinking, and hooking up make a woman a bad wife, and bad wives are also, by definition, bad mothers. The kinds of habits that cause a woman to be a good wife, to knit her heart with her husband's, and to put others before herself also help to ensure that her children will grow up in the stable, married home they need. Premarital sex undermines marital stability. A habit of selfish indulgence doesn't magically end when the wedding is over. The habits we make follow us for a lifetime.

6) Selfish, irresponsible behaviors like drinking heavily and premarital sex cause disease and reduce a woman's chances of having healthy children. Alcohol kills brain and liver cells. Some STDs can be transmitted to a child, cause cancers of the reproductive organs, or cause sterility. Fertility isn't assured for any woman as she ages, but it's even less sure if she is engaging in behaviors that put her and her reproductive health at risk.

7) Smart, loyal men who want to settle down and have a family don't pick partying women for that role, and for good reason. The 30-something living weekend to weekend just to party or hooking up with a string of different men is not good wife material. So when she finally decides, in her mid-30's, after being all used up, that she wants a husband and children, she is very likely to find she has zero prospects. Men aren't going to marry her now. They're not stupid.

The bottom line is that women who want a husband and children need to plan in their teens and early-20's to pursue behaviors that help further that goal and prepare them to find a good man and make use of their fertile years. They need to be cultivating the kind of character that makes good wives and mothers. They need to be making wise and healthy choices. Those who do the opposite and think they can party like there's no tomorrow will likely find that their family goals never come true, and all because they made poor choices. For good or for ill, we reap what we sow.

Email ThisBlogThis!Share to TwitterShare to FacebookShare to Pinterest
Labels: Feminism, Marriage and Family 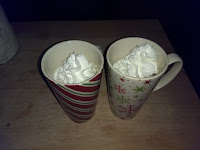 My husband and I are very fond of white chocolate. To us, the very best kind of hot cocoa is white chocolate. We've tried a couple different brands, but they're expensive and hard to find. Then we found this Ghirardelli white chocolate powder, and it's awesome. It only comes in a big 50 oz can, but it's about 1/3 the price, ounce for ounce, as other brands and it tastes better. Plus, it can be used for more than just hot cocoa. It's just powdered white chocolate, so you can add it to coffee or cappuccino, dust cakes with it, use it for frosting, or any number of other uses. The hot cocoa is a great wintertime treat, and we like to curl up on on the couch with a hot mug and watch a movie after the kids go to bed.

Pour the milk into mugs and microwave until hot (around 1.5 minutes, depending on your microwave). Alternatively, the milk can be heated on the stove. Add a drop or two of vanilla extract and the white chocolate powder and stir until dissolved. Top with whipped cream for an especially decadent experience. 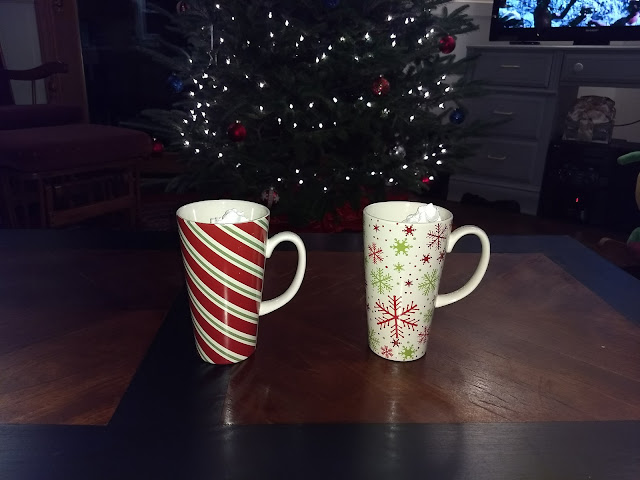 Note: This post contains affiliate links which do provide us with a small percentage of any purchase made through the link. All opinions are my own. Purchasing through the link does not affect your purchase price, but does help support this blog.
Posted by Lindsay Harold at 9:10 PM No comments: