God used Alexander the Great to Accomplish His Will

If you want to be amazed at how God works through history, here are some interesting facts. Note that God didn't just work through Biblical history and the Jewish people. He works through all kinds of people and in all places and times to accomplish His will.

The Bible has several interesting prophecies that have to be mentioned here as background. First, there's Psalm 22 in which a public death is described via piercing hands and feet, a gloating crowd, thirst, and bones out of joint. This is fulfilled 1,000 years later when Jesus Christ is crucified. But at the time David writes this psalm, there was no such thing as crucifixion yet. It hadn't been invented.
Secondly, Ezekiel 26 prophesies the destruction of Tyre in great detail. The city walls would be destroyed and the city would be thrown into the sea and scraped clean like the top of a rock. Some of the fulfillment occurred when Nebuchadnezzar laid siege to the city and destroyed the part of the city found on the mainland, but part of the city was found on an island off the coast. Destroying the island portion of the city awaited a later fulfillment.
Third, Daniel 7 and 8 predict the rise of a great empire after the Medo-Persian empire that will destroy it. In particular, Daniel 8 predicts that this empire will be Greek and that the first king will grow to great power very quickly, then be suddenly cut off in the height of his power followed by a division of the kingdom into 4 main kingdoms that will not have the strength of the original.
So let's see how these prophecies are all intertwined in the life of one remarkable man: Alexander the Great.
Alexander the Great became king of Macedonia in Greece at age 20 and consolidated Greece under his banner. Shortly thereafter, he began conquering neighboring lands. In 332 BC, he approached the city of Tyre and asked to make a sacrifice in their temple, which was on the island. The leaders of Tyre refused him and killed his messengers. Alexander was enraged at this response and set out to completely destroy Tyre. The mainland portion of the city was still mostly in ruins at this time from the ravages of Nebuchadnezzar some 250 years earlier. The island was extremely well fortified, with a tall wall all the way around and a strong navy to protect it.
Alexander had no navy, but this did not deter him. He set his soldiers to work throwing the ruins of the mainland city into the sea to build a causeway from the shore out to the island. They scraped the area clean, even throwing the soil into the sea. After a lengthy process of building the causeway, Alexander’s men finally took Tyre. They destroyed the walls of the island city, killed the men, and sold the women and children into slavery. But in the process, Alexander introduced a new form of excruciating death for the soldiers of Tyre. They were crucified. Alexander did not invent crucifixion, but his use of this method made it more known and likely contributed to the later Roman use.
After the brutal destruction of Tyre, few dared to stand against Alexander and his conquest proceeded rapidly. In about 10 years, he conquered the extensive Persian empire. He then died suddenly of disease, leaving no heir. His kingdom was divided among his generals, with a period of struggle for power resulting in 4 major divisions that were fairly stable for many years.
In his brief 32 years, Alexander fulfilled multiple Biblical prophecies and conquered most of the known world at the time. As far as we know, he did not know the one true God, yet he was used by Him. He is not named in scripture and no scripture was written during his lifetime, yet God was clearly orchestrating the events of his life for a greater purpose. Alexander’s conquests not only fulfilled scripture, but spread the Greek language and culture far and wide. This set the stage for the Messiah to come to a world where communicating the gospel was much easier, thanks to the widespread use of the Greek language. The New Testament documents were written in Greek and spread rapidly to many nations. They changed the world.
Posted by Lindsay Harold at 4:10 PM 1 comment: 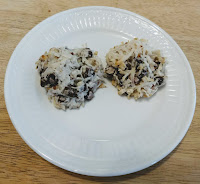 These cookies are super easy to make and so tasty. If you take a look at my recipe posts, you'll see that I like coconut. So here's yet another coconut recipe. These are great as snacks or dessert and they have the added bonus of being gluten-free.

Prepare cookie sheets by lining with parchment paper. Mix all ingredients thoroughly. Form mixture into balls and flatten slightly. This step is easier if you wet your hands with cold water periodically. Bake at 325 degrees for 12-14 minutes or until starting to brown. Enjoy!

Email ThisBlogThis!Share to TwitterShare to FacebookShare to Pinterest
Labels: Recipes

I make this healing balm from natural ingredients and it is great for healing and restoring dry skin. It's good for chapped lips, but also any dry or irritated skin. It clears up my husband's eczema on his hands. It heals that dry, crusty skin on your nose after a cold. I use it on cracked, dry knuckles during the winter or on my feet. It's just all around great skin care. It's not very greasy, so it works even on your hands or face, but it also produces a sort of protective layer that helps keep skin from drying out again.

In a double boiler, melt the cocoa butter, beeswax, and shea butter until just melted. Turn off the heat and add the coconut oil. Stir until melted and combined. Open the vitamin E capsules with scissors and squeeze the oil into the mixture or add liquid tocopherols. Stir gently.

While the lip balm is still warm and liquid, pour into lip balm tubes or a small jar. Allow to cool completely before disturbing.