Should Christians Be Cremated?

It is common for people today to ask whether it is acceptable for Christians to be cremated. Many have a sort of vague idea that it's not okay, but don't really know why. Others instinctively believe cremation to be perfectly fine because it's accepted in our culture and they can't imagine what would be wrong with it. In times past, being buried was an extremely important issue to many, with some even believing that they could not enter heaven unless they had been properly buried. Sailors often wore a gold or silver earring in hopes that if their lifeless body were to wash up on shore, the precious metal would cover the cost of their burial.

But is it really all that important what happens to our bodies after we die? Is cremation wrong? To clarify the issue, it is helpful to ask a couple of questions.

1) Does being cremated prevent a person from going to heaven or having a resurrection body?

2) Should Christians choose to be cremated?

There is a distinction between these two questions that is not always apparent when discussing cremation, but I want to answer these questions separately because they are separate issues.

In response to Question 1, I think it's clear from scripture and scriptural principles that being cremated does not prevent anyone from being resurrected or going to heaven. God does not need an intact physical body in order to provide us with a resurrection body. A person can't be prevented from going to heaven by what someone else does with their dead body. Whether a body decays, is burned, is eaten by animals, or whatever else may happen to it, this does not affect the eternal future of that person. We are safe in God's hands when we trust in Him. We don't have to worry about whether someone will burn or otherwise destroy our bodies after we die. The early Christians were often fed to lions or burned alive, and they knew that they were going to be safe in heaven when their ordeal was over. Nothing that man can do to our bodies can separate us from God.

On the other hand, the symbolism and tradition of burial among Christians contrasted with the burning of bodies by heathens is not something to ignore either. Christians have always buried their dead as a symbol of the hope for bodily resurrection while many who reject God have used the burning of dead bodies to symbolize returning to the earth and a distinct lack of hope in a future resurrection.

Christianity has always taught that our bodies are not merely physical stuff that is irrelevant to who we are. We are not souls who have a shell of a body to live in for a time. Rather, our embodied existence was always intended to be an integral part of who we are. And that is why we will have resurrection bodies in heaven, because a part of our enjoyment of heaven comes from a physical experience and part of God's eternal plan for us is that we are to be embodied souls rather than just a spirit.

Thus, when we treat the physical body with respect during our lifetime and when we treat it respectfully in death by not purposely destroying it, we show our respect for God's plan that we are to be embodied creatures.

Burning our bodies is not respectful of our bodies or their Creator. Just as burning a flag is a way to show contempt for the flag and thus the country symbolized by that flag, burning a human body shows contempt for that body and the God in whose image that person was made. There's a reason so many enemies of Christianity burned the bodies of Christians - either alive or dead. There's a reason cultures all over the world often burn the bodies of their enemies. There's a reason burning a cross is easily discernible as a sign of disrespect. People burn things that are considered sacred to show that they do not hold them sacred or worthy of honor.

We should not treat our bodies with contempt or disrespect. Others may do so to our bodies after we die, and we cannot prevent that entirely. But we should not make the mistake of choosing to have our bodies burned because then we are the ones showing disrespect.

We should not treat the body as irrelevant or an anchor holding us down. Our bodies are given to us by God as part of His perfect plan. We aren't godlike spirits that need to be freed from houses of flesh, as some false religions teach. We don't need to escape our bodies to become perfect. Flesh is not intrinsically evil or base. Rather, God will perfect our bodies.

On the other extreme, we should recognize that our physical bodies are not the entirety of who we are either. We are not merely dust of the earth that will return to dust and that's all. We don't cling to the empty hope that we will live on by returning to the soil and being recycled into another living thing over and over as many atheists do.

Both of these extreme views - that the body is everything or the body is nothing - are a corruption of the correct and Biblical position that both body and spirit are integral and important parts of who we are. Choosing cremation or any sort of burning of the body claims either that the body is nothing, and thus can be disposed of with impunity, or that the body is all there is, and thus is not sacred. Treating a dead body with honor and respect means not purposely destroying it. The symbolism of burial affirms that we are not merely a body, but also that the body is sacred and important, not a useless shell that can be destroyed when we no longer need it. And that is why Christians have buried their dead for thousands of years, and why they should continue to do so.

Posted by Lindsay Harold at 9:41 AM 2 comments: 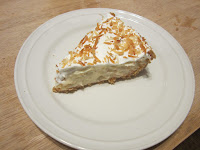 In case anyone was wondering, I'm a big fan of coconut. I have recipes on my blog for coconut cake, coconut-topped chocolate cake, coconut macaroons, coconut custard pie, and coconut pecan pie. Picking which one is the best is difficult because they're all so good, but I am leaning toward this one. It's so creamy and delicious. It's certainly the best coconut cream pie I ever had. Many of them are lots of fluff and not a lot of taste, but this one is richer and with a more substantial, homemade taste. Plus, it's not that hard to make. The most difficult part is waiting for it to cool and set up so I can eat it.

First, make the graham cracker crust. If you're in a hurry or cooking-impaired, you can use a store-bought crust, but it's easy and cheap to just make one. Chop the graham crackers into fine crumbs. I use a food chopper, but you could also place them in a plastic baggie and beat them with a wooden spoon. Stir in the melted butter and brown sugar until all the crumbs are moistened. Press the crumbs into a greased pie plate to form a crust. Bake the crust at 350 degrees for about 5 minutes. This helps melt the sugar and solidify the crust. Cool the crust. 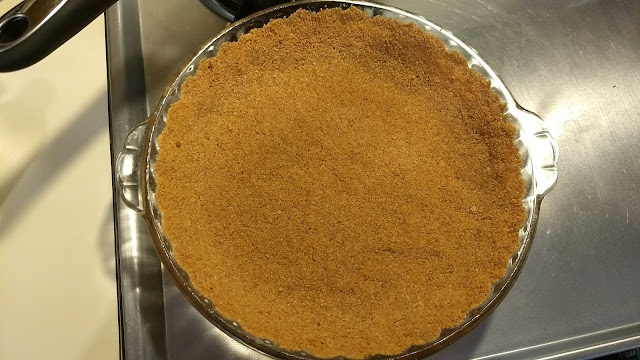 Toast the cup of coconut on a baking sheet at 350 for about 5-8 minutes, stirring occasionally so that it all gets evenly toasted. I do mine in the toaster oven where it's easier to keep an eye on it and doesn't heat up my whole kitchen. 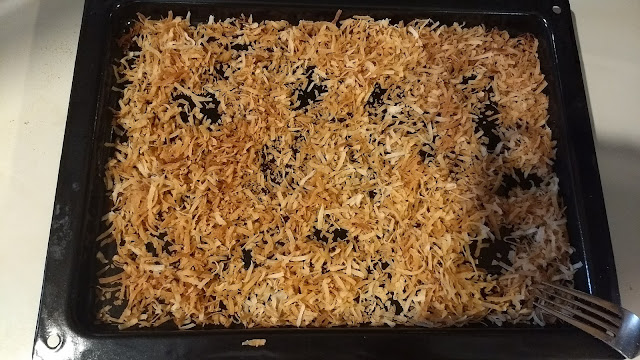 Beat the eggs in a 3-quart saucepan. Stir in the half-and-half, sugar, salt, and flour. I usually don't keep half-and-half on hand, so I just mix 1-1/2 cups whipping cream with 1-1/2 cups milk to make my own half-and-half. Bring the mixture to a boil over medium heat, stirring constantly. It will thicken into a pudding. 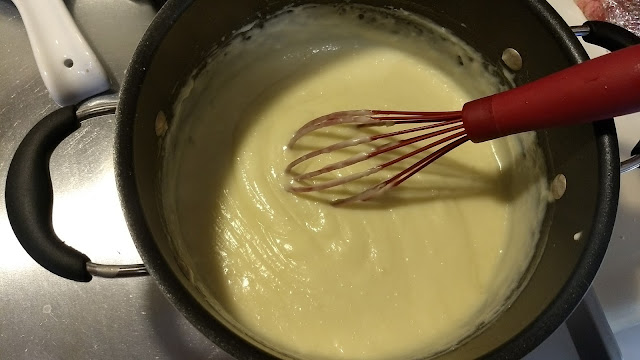 Remove the pan from the heat and stir in 1 tsp vanilla and 3/4 of the coconut. Pour into pie crust and smooth the top. Chill 4 hours or until set. 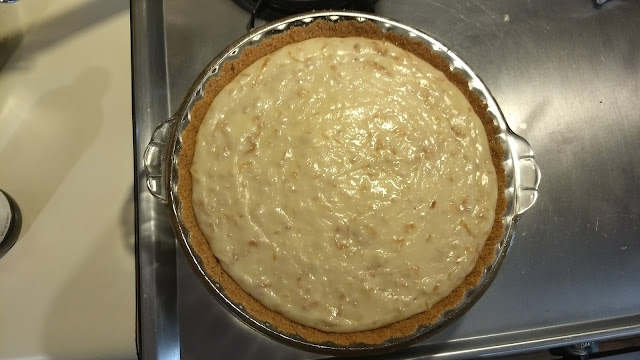 Spread with 1 cup cool whip (or a little more, if you want) and top with the remaining toasted coconut. Enjoy! 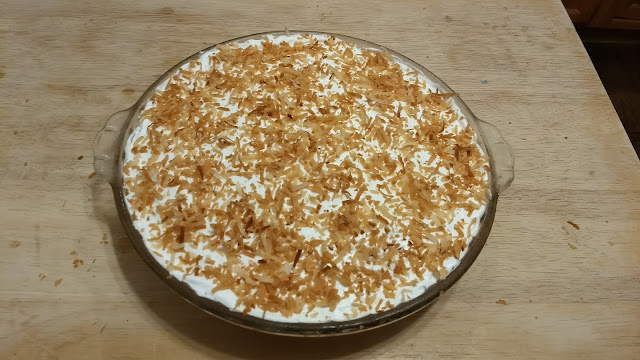