Why Women Should Not Be in Combat

I know it’s not very politically-correct to say this, but women should never be placed in combat positions in the military. Women, by their very design, are not as well-suited for battle conditions as men. This includes multiple aspects of their physical and mental design.

For example, the forearms of women have a deeper notch in the upper arm bone that makes their forearms more flexible. Because of this, women can move their arms further back than straight at the elbow. Men's arms do not reach 180 degrees, and this is a strength feature. A man will be able to lift more weight than a woman, even if their arm muscles were of the same mass, just because of this alone. But in addition to that, a man's bones are thicker and tougher than a woman's as well.

Of course, the idea of equal muscle mass is an illusion because the biology of men (including much higher levels of testosterone) means they can put on much more muscle mass than women and they lose it more slowly (meaning it's easier to stay in shape). When it comes to sheer strength, women simply cannot compete with men on a general basis. Some women are stronger than some men, of course, but men as a group have a much greater potential for strength than women. Few women have the ability to carry a grown man off the battlefield or to carry the large packs of supplies they need for a mission. They simply don't have the strength.

Women also have hips that are wider to allow for bearing children, but those same pelvic bones are less well designed for running fast, which can be important in evading enemy fire, keeping up with the pace of the group, or charging enemy lines.

Speaking of their pelvic region, women also have a genital area that is much more vulnerable to infection under dirty and primitive conditions often seen on the battlefield. A woman has a large surface area of moist mucous membrane in that region and a much shorter urethra, both of which make her far more vulnerable to infection that can travel easily to internal body regions and become serious or even life-threatening. The design of male genitalia makes men able to handle less sanitary conditions for longer periods without serious health risks.

Of course, women also have a monthly bleeding issue that makes hygiene and privacy more difficult without sanitary bathroom facilities. And not only do women need to keep that area especially clean at that particular time of the month, but even daily tasks like urination are more difficult for women. Having to squat makes women not only require different facilities and better sanitation for their elimination activities, but makes them more vulnerable during a surprise attack. A man surprised mid-stream is still on his feet, ready to run or charge. A woman...not so much.

Men have a larger lung capacity than women, even at the same height and body mass. This gives them a greater ability to intake oxygen. Men also have a greater percentage of red blood cells in their blood, allowing them to transport more oxygen to their muscles when needed. These features give men greater endurance.

All of these individual features I have mentioned point out potential liabilities for single-cause injury or death. However, women also have less of an ability to stand up to the long-term physical strain of being in combat and are more likely than men to experience physical breakdown and require medical care for less quantifiable reasons.

In addition to the many physical reasons that women are less adapted to battle conditions, women are also less mentally prepared for the horrors of battle. Not only does the physical strain weigh more heavily on them and cause physical breakdown faster in women, but the same is true mentally. Women are more prone to mental issues like PTSD in the wake of battlefield stresses. The horrors of war will break down many men, but women are even more vulnerable to this side effect.

Because women are not designed for battle, putting a woman into combat is a risk to both the woman herself and to the rest of her unit. Her physical and mental health will be more threatened by what she encounters than a man in the same situation. Thus, battle is more dangerous to her. But when any member of a unit is compromised in speed, endurance, strength, or mental fortitude or when they are injured or killed, it places a greater risk upon all of them as they try to make up for the lack and protect their fellow soldiers. Having a woman in the unit is a liability that simply wouldn’t exist if that woman were replaced with a man.

I've already identified many reasons from biology that women should not be in combat, but there are many other issues that could be put forth. I haven't even mentioned here the significant challenges involved in men and women sharing close quarters, the instinct of men to protect women even when it would not be advisable in a military context and the threat this poses to male soldiers, the very real risks of rape to women in the military (both from fellow soldiers and from the enemy if they were to be captured), the need for privacy, the sexual tension, the cost of separate sleeping and bathroom facilities, and many other relevant issues.

What it comes down to is that, if the military were just for show and didn't engage on the battlefield, it wouldn’t matter whether we had women in it. But if the military is a serious force designed to engage in battle efficiently and effectively, then for purely practical and ethical reasons alone, women should not be part of its combat forces. 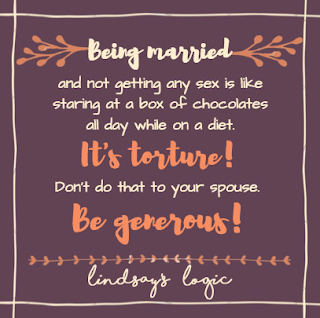 Sexual refusal is a serious problem in many marriages. Even Christian marriages. In most cases, it's the wife doing the refusing. So here's my message to the ladies who are saying no to their husbands and denying him sex or those who are struggling with wondering why they are expected to have sex regularly with their husbands.

Ladies, if you're married, your husband probably doesn't have the gift of celibacy. And he got married, at least partially, in order to fulfill his God-given sex drive. That's one of the legitimate purposes of marriage.

Not only that, but when a man is single, while it's certainly difficult to abstain from sex, at least he doesn't have a beautiful woman sharing his living quarters and tempting him every day.

A married man has both the legitimate expectation of getting sex and a woman he loves and is attracted to right there in his home all the time. To expect him to abstain for long periods when the object of his desire is right there in his bed every night is to ask too much. It's like staring at a box of chocolates all day while on a diet. It's torture.

So how does a man deal with a wife who refuses him all the time? The same way we deal with the chocolates when we are trying to diet. We put them away, don't look at them, and try not to think about them.

This is why refusal hurts marriages. A man will withdraw from his wife if he is being constantly refused. And it will tear them apart. It's too hurtful for a man to engage with a wife, spend time with her, and build up all that desire from being around her only to be constantly frustrated. So he'll protect himself by avoiding her.

Don't do that to your marriages, ladies. Build that connection your marriage and your husband need by engaging in sex frequently. It's God's design that marriages need sex to stay strong. Sex isn't just a physical act. It's an act of connection and love. So when you don't feel like it, remember that sex isn't optional or irrelevant. It's important maintenance for your marriage.

Of course, it's even better if you learn to like it. Sex can be great fun. If it's not fun for you, then perhaps there are some things you can do to boost your libido or learn how to get pleasure from it. But even when you can't imagine sex being fun, don't forget how important it is.