This is, by far, my favorite potato soup. I might be slightly addicted. It is definitely not boring. It's very savory and creamy and really awesome on a cold day. Serve with a hearty sandwich or some cornbread or use it as an appetizer before a nice meal.

Bring chicken broth, chicken base, and potatoes to a boil in a large pot and cook until potatoes are just tender.

While the potatoes are cooking, melt the butter in a small saucepan and stir in the minced garlic and the dried chives. Alternatively, you can use fresh chives instead of dried and add them at the end, but I don't usually keep fresh chives on hand.

Add the flour to the butter mixture and heat until bubbling. Cook for 2-3 minutes, stirring constantly. This mixture forms a roux which both thickens and flavors the soup. Once the potatoes are getting tender, add the roux to the soup, stirring as you pour. Continue boiling for a minute or two until it begins to thicken.

Add the cream cheese, sour cream, and pepper and stir until combined. Heat through. Serve with bacon bits on top.


This soup is really good served with grilled cheese or grilled ham and cheese sandwiches. I use sharp cheddar for the best combination with the soup. I lightly butter the outside of the bread, put the cheese in the middle, and heat on a griddle or pan until the bread is browned and toasty and the cheese is melted. These are great dipped in the soup. The sharp cheddar really complements the creamy soup. It makes for a warm and satisfying meal on a cold day. 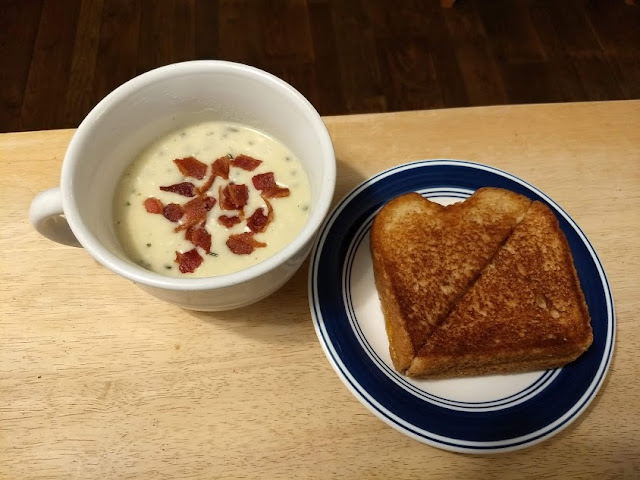 Posted by Lindsay Harold at 8:00 AM

Email ThisBlogThis!Share to TwitterShare to FacebookShare to Pinterest
Labels: Recipes