Katelyn Rachelle Harold is here! She was born August 20th at 11:14 am weighing 7 lbs 9 oz and with a length of 21.5 inches. We are happy she is here safe and sound. Today was my due date, but Katelyn came 8 days early and so she's 8 days old today. 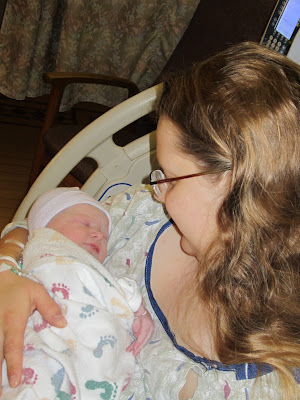 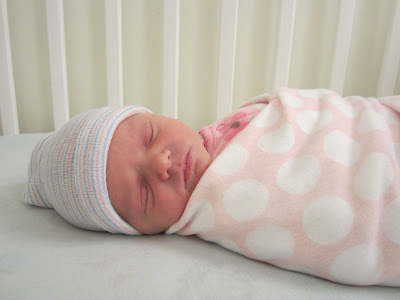 For those interested in how it happened, here's the birth story. For those not interested in labor and delivery, you can skip this. No hard feelings. It's really not that interesting except to some of us moms.
-----

Anyway, my water broke sometime on the 19th. I kept getting little trickles of fluid, but it wasn't nearly as obvious as what happened last time with Reagan. I knew when my water broke that time. But I finally convinced myself that it must be amniotic fluid that evening. So I called the doctor and, at their insistence, went to the hospital to be checked. It was an hour drive and I really didn't want to go, especially since I knew they wouldn't let me go home if my water was broken. I wanted to go to bed (it was after 10 pm) and see if my body would get going on its own. With Reagan, my water broke and I started labor a few hours later. But nothing was happening. So there I was on my way to the hospital with no contractions going on and hoping they weren't going to induce me.

Yep, my water was broken alright. I wasn't going home that night. So they gave me the option of just waiting to see what happened or to start things off with an oral prostaglandin, which was supposed to be gentler than inducing with pitocin. Considering that it had been hours since my water broke and I wasn't having any contractions yet, I decided to go ahead with the prostaglandin in hopes of avoiding pitocin.

It worked...sort of. I started having contractions, but they didn't get very strong or regular, even after 7 hours. So they recommended pitocin to get things moving and avoid the risk of infection from having my water broken for too long before delivery. It was a greater risk for me since I am Strep B positive and we weren't exactly sure when my water had broken. So I ended up taking pitocin and deciding on an epidural. Call me chicken, but pitocin with no pain relief is no joke. Unfortunately, it took awhile to get the anesthesiologist started and then the first time didn't work. So I ended up sitting there, back hunched (which is NOT a comfortable position for labor, by the way, since it puts a lot of pressure on the abdomen), for about an hour while they did and then re-did the epidural. And then it didn't completely relieve the pain. It made my legs completely numb, but rather inconveniently left certain other regions with pretty good sensation, although it did help some.

And just as I was starting to get some pain relief from the epidural and hoping to FINALLY get some sleep, or at least some rest...

I started getting a lot of pain and pressure. And it got worse. I thought my cervix was going to rip in two. Seriously.

They had just checked me before they did the epidural and I was at 5 centimeters. So I figured I had quite a ways to go yet. But no, in the space of about 3 minutes I went all the way to 10 centimeters. Maybe it was laboring in that uncomfortable position. Maybe it was being able to relax a bit after getting some measure of pain relief. But I went through transition in a big hurry. And all the sudden they are calling the doctor and telling me not to push yet (which is easier said than done, by the way).

The doctor came in and got ready pretty quickly and then it was just a few minutes of pushing later that Katelyn made her entrance. But she was blue and not responding very well. The cord had been wrapped around her neck twice, which I didn't find out until later. I was a little worried, but after some rubbing and suctioning, she finally started crying and turning pink. It's a good thing I didn't have to push any longer or she might have gone without oxygen for longer. But she is fine and we are so thankful. God is good.

We even got to go home just 24 hours after the birth. So here we are in the land of wakeful nights and round-the-clock feedings and learning to juggle a newborn and a toddler. But I wouldn't have it any other way.

Linked up with WLWW.
Posted by Lindsay Harold at 11:31 AM

Email ThisBlogThis!Share to TwitterShare to FacebookShare to Pinterest
Labels: Children